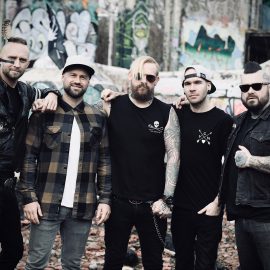 Prague based band Pipes and Pints had a wild and exciting time for the past two years which concluded with the release of four brand new singles from the upcoming new album The Second Chapter.

,, Raise our Flag,,  and ,,Rebel in my Veins,, started a  new era for the band and together showed the fans that they are still their favorite Pipes. The next single ,,Dark into the Night,, is more melodic, influenced a lot by country music in contrast to ,, Karma Killer,, which is influenced by sharp metal and rock and roll.

Dark and Karma are new sounds for Pipes and Pints showing the progress regarding sound and songwriting. Karma Killer is also symbolic of cutting ties with the past. ,,We are taking destiny into our own hands,, says band leader Vojtěch Kalina (bagpipes).

Pipes and Pints were formed in Prague in 2006. Their unique sound is a combination of traditional celtic, country, rock and roll and punk-rock. All connected thru the sound of highland bagpipes. The stage energy together with this combination of instruments makes the performance unforgettable and uniquely Pipes and Pints.

Over the past few years the band released two studio albums. Until We Die in 2009 and Found and Lost in 2012 followed by years of touring across Europe, Russia and UK . This almost non-stop journey brought evolution for the bands setlist and line-up.

Pipes and Pints are now back with brand new record called The Second Chapter being released in May 2019. With the new Irish singer Travis O’Neill their enthusiasm for the new era has brought their performance to new heights.  During 2018 the new Pipes had already played dozens of single shows followed by a tour in Spain, France, Switzerland and Germany.

The first album with the new face represents,, a definitive entry into the new era‘‘! The Second Chapter has more melodic sound, the songs are musically diverse with more rock sound but still keeping the celtic rock and roll wibe.

The release of the new album, recorded in Red Bull Music Studios in Berlin, will be supported by European tour mostly in Czech, France, Germany, Austria, Swiss, Italy, Poland and Spain.